This is more a work around that a fix, I believe that actual issue will be full resolved with a ROM upgrade of the blade chassis. I was working on a system that had a number of HP blade servers, when I rebooted the servers after a software upgrade the blade would appear to hang before its POST (Power On Self Test), when attaching via ILO (Integrated Lights Out) or when plugin in a monitor direct. For reference the blade models where HP BL460s and BL495s G7s.

Even a hard reset of the blades would not resolve this issue. At first the only way to get around this was to reseat the blade server as we could not ROM the blade chassis as that would of meant down time.

In the end I found a way around removing the blade from the chassis was to send an NMI (Non Mask-able Interrupt) via the ILO to the blade, this then forced the blade server to reboot.

What is a Non Mask-able Interrupt?

A non-maskable interrupt (NMI) is a hardware interrupt that the server cannot ignore by its standard interrupt masking techniques. They are typically used to signal attention for non-recoverable hardware errors like I was having in this example. (Some NMIs may be masked, but only by using proprietary methods specific to the particular NMI.) Here I send an NMI via the HP ILO.

Send NMI via ILO To Blade

Once you have logged onto the chassis via its address you need to select the ILO option of the blade server.

We then need to choose Web Administration. 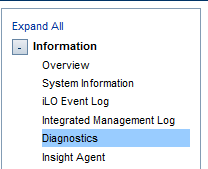 Finally we send the NMI, the HP Blade will then display the interrupt and you will be able to power cycle the HP blade now from the ILO.