Written by Allen White on November 21, 2013. Posted in Veeam

A client of mine recently built a new SQL server and added the SQL server to the Veeam Backup job. When running the backup the new SQL server would fail when backing up with the following error.

The client was running version 6.5 and was eligible for an upgrade to 7 so I carried out the upgrade of veeam 6.5 to 7. Unfortunately this did not resolve the issue. On the SQL server I wanted to check the status  of the SQL VSS Writer which Veeam uses to freeze the DB, to do so I issued this command at command line on the SQL server.

This showed me that the SQL Writer was in a timed out status. Now im not an SQL guru bu any stretch of the imagination, however after doing a bit of research I found that sometimes when the account you use in Veeam does not have access to the SQL instance then you may get this issue. 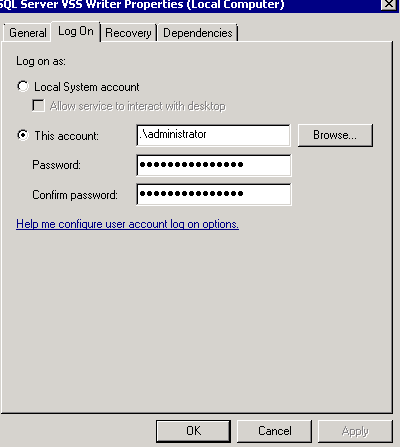 I then restarted the service and ran.

I then went back to my Veeam server and ran the SQL job again. Success. Thanks to my colleague Stephen Morrison for help getting through this issue.